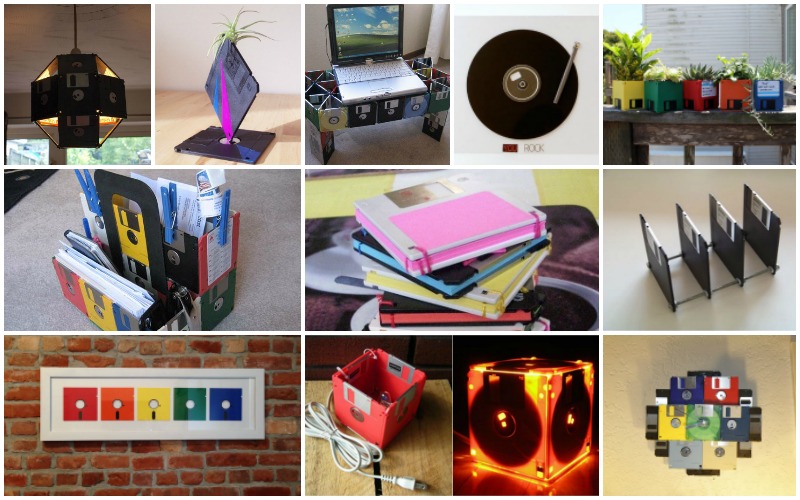 With the evolving of technology, many electronic devices have been replaced with new ones and left useless. For instance, that is the case with floppy disks. Floppy disks were the medium of choice during the 80’s and 90’s and now everyone is using flash drives to transfer information. And it seems that nowadays, almost everyone of us has a bunch of floppy disks in some drawer that we no longer use but haven’t even throw them away. So, how about you take them and make something out of them? Yes, you can recycle old floppy disks in so many versatile ways and today we are bringing to you several of them that you can get inspired from. Check them out and let us know which one of them you will try to copy. Enjoy!

One of the easiest ways to recycle floppy disks is to turn them into coasters. Here is a step-by-step tutorial of how to do it.

Planters can be made out of so many versatile items and floppy disks are just some of them. Take five floppy disks and a glue gun and your planter is ready.

And here is one more idea of how to grow plants in a floppy disk but this time of an air one.

If you are missing some caddy or basket for storing all those bills, take several floppy disks and create some.

You can easily make these notebooks with floppies as the covers, but you can buy them too.

If you love wearing unique bags that will make a statement, then you may try to make some out of many floppy disks.

If you are missing some paper holder, you can try to make some by piercing several floppy disks and putting a metal stick through them.

In case you don’t have time to go to the store to get a greeting card for your friend’s birthday, try to make this one out of old floppy disk.

Wall clocks can be made out of just about everything, so why don’t you try to make some out of several floppy disks.

Lampshades can be also made of versatile items and here is an idea of a floppy disk lampshade.

If you are missing some pencil cases for your office desk, try to make some out of old floppy disks.

You can also make a unique night light by making a box out of floppy disks and installing a light fixture inside.

Floppy disks can be also used to create some wall decorations. You can arrange them in all possible ways to create different shapes, for instance a heart one.

Or you can simply place them in a frame to create a rainbow wall art decor.

Here is another super cool and useful idea of how to make a laptop stand out of many floppy disks.

And the last idea that we have chosen for you today is of cool earrings made from floppy disks parts.

How to upcycle your coffee table with furniture paint

A Beginner’s Guide to Using MDF Boards in DIY Projects