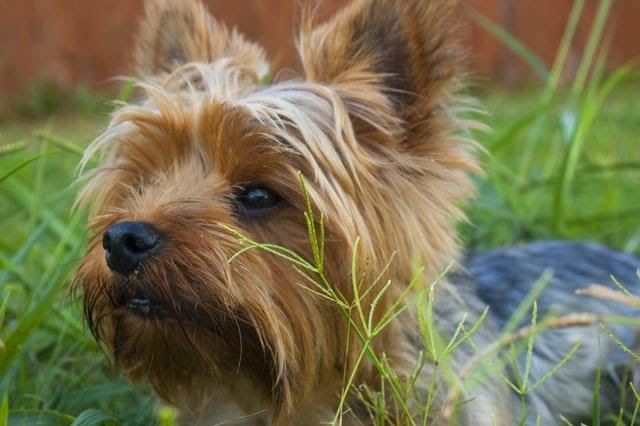 Back in 1934, the Cairn terrier was a type of breed featured in many pop-culture flicks. Becoming one of the most popular canines in the world of film, Toto, the Cairn Terrier, even had a memorial in Hollywood Forever Cemetery, with a life-sized statue (read more), which is far bigger than the actual size of a terrier.

Originally, its name, Cairn, resembles the breed’s function, which was to hunt between the cairns found in its place of origin. Before it gained popularity in the world of film, the Cairn terrier had a long history as one of Scotland’s earliest working dogs. Their specialty was to chase quarries as far back as the 1920s. They have also helped control vermin on the Isle of Skye since the 16th century.

According to the American Kennel Club, the Cairn terrier has ranked 69th in the most famous breeds of canines. Not just because of their trainability when it comes to acting and being a work dog, but because they are regarded as one of the most affectionate household pets a man can have!

With its very loving and playful persona, many pet owners have been charmed by its more tolerable demeanor more than any other terrier breeds out there. However, a thing to note is that this kind of breed does not usually get along with other pets and has the tendency to display mischievous behavior. If you’re planning on getting a terrier as a companion, here are the things you must know about them.

The Cairn Terrier is irresistibly cute. With its friendly personality and intelligent qualities, they can be your next best friend. With how they perform in hunting before, they are still very lively and are very trainable. They have this eagerness in themselves, which you might be required to train them to avoid their boredom. Also, this breed is relatively small, but they work well as a protector of the house since they are really active and have a strong watchdog instinct.

They are also sturdy and willful; even if they are smaller than any other dogs, they tend to get more powerful, leading to aggression. Therefore, regular training is a must if you own a Cairn Terrier to control their temperament. That includes showing solid leadership for them to follow in order to make them obedient as they grow.

Although they show toughness, they are very affectionate, as mentioned. Furthermore, they must live in a house or apartment, where the family members reside, as they may require your attention most of the time. While it is possible to leave them alone in a home for 4 to 8 hours per day, however, the Cairn terriers enjoy being surrounded by people as much as possible. And the problem with them is that they tend to bark a lot while showing signs of destructive behavior when he’s bored or if he does not play. That includes digging and chewing.

Many health conditions in canines are heritable, so you may wish to learn more about their underlying causes in order to help avoid them. Unfortunately, the Cairn terrier also possesses the risks of having an unhealthful life. But you can still prevent it by making regular vet visits to ensure that your canine is in its best shape and form.

Like all other canines, the Cairn Terriers are highly susceptible to bacterial and viral infection. It is preventable through up-to-date vaccination, which will be based on your pet’s age, diseases, weight and size, and other factors. Also, they must get moderate exercise since they are very active. If not, they can be linked to obesity, which is a severe disease for most canines since it may decrease their mobility, especially as they age. It could even worsen their joint problems, digestive disorders, and heart conditions.

Though it may be tempting to share something with your pal when she looks at you with those cute eye expressions, you might need to play with her instead of giving more treats than what she should consume. It is best specifically for the Cairn terrier since they require the most active plays to avoid being unruly. Also, exercising is a must for them for mental stimulation (link: https://petidregister.com/cairn-terrier/how-much-exercise-a-cairn-terrier-needs/).

They can even get a liver defect called portosystemic shunts, which will require surgical operations. In fact, there is a 2003 article published in the Journal of the American Veterinary Medical Association, in which dog breeds have been compared to each other, and Cairn Terriers were found to be 10.7 times as susceptible to this condition.

Cairn’s waterproof double-coat protects him as he runs through the brush and brambles. Bathing him too often will remove the protective oils from his coat and soften its natural coarse texture. So it is best to take them into the bath once every three months or so, alternatively. If he gets in between his playfulness in something stinky before his bath, wash him as needed.

Also, he does not shed a lot, which is a good thing for most homeowners as you do not need to clean your carpets all the time. Therefore, he is considered hypoallergenic due to its little dander, which will keep allergen levels low and won’t trigger someone who has allergies or asthma. In grooming, you might just have to brush their coat not too frequently but just to maintain its cleanliness without tangles. You might just have to get him a trim once in a while since their fur grows fair and fast.

PLANNING TO PURCHASE A FISH TANK? HERE ARE SOME BUYING TIPS