When you mention street art, most people will picture the kind of graffiti that denotes a gang-riddled area, or perhaps something more on the recognized side of art, such as the works and murals of the famous Banksy. But street art, also sometimes called ‘independent public art’, ‘urban art’ or even ‘neo-graffiti’ is gaining more and more recognition in the formal art space. So what is this movement all about, and where does it come from?

What is street art?

Street art or graffiti generally refers to works that appear in public spaces, such as the walls of buildings, subway stations and trains, tunnels and the like. It refers to work that hasn’t been commissioned or authorized by any public authority, but used by an artist purely as a form of expression outside of a traditional artistic venue such as a gallery or exhibition. It is a way for artists to reach a much wider audience than traditional gallery settings allow, and can take several different forms. Yarn bombing, balance sculptures, and even video projections and underwater installations have been recent additions to the field of street art.

How is street art different from graffiti?

While it’s difficult to define precisely, the difference between graffiti and street art is the intention behind the work. Graffiti writers aren’t terribly interested in having the public understand a deeper meaning in their artwork. Graffiti tends to be more about the pure style of the lettering used, also sometimes called ‘calligraffiti’, while a street artist is more likely to be trying to send a message or make a comment about a social issue through images.

Street art as a tourist attraction

Many ‘millennials’ are fans of street art, and as millennials love travel too, many street art and graffiti hotspots across the globe have become tourist destinations in their own right. In fact, some cities are even undertaking projects to encourage street art, as it can have a positive impact on tourism levels. One such effort took place in Mexico City, which implemented a project called the “All City Canvas”. It took 11 months to arrange all the suitable permits for 9 local and international artists to come in and create the spectacular murals and artwork seen today.

From New York to Hollywood, Montreal and Toronto in Canada, Buenos Aires and Sao Paulo in South America, London, Paris, Italy and Amsterdam in Europe, almost every major city has some form of street art community. In countries such as Poland and Bulgaria, street art and graffiti is often used as a means to communicate the lingering effects of communist history. Cities like Berlin, London, Paris and Hamburg even have popular street art tours that run throughout the year.

The crossover from graffiti into street art began around the end of World War II, and while there is some debate as to whether the first pieces appeared in the UK or the US, at first the art tended to be quite simple. In the UK, the ‘Mr Chad was here’ doodles appeared. In the US, ‘Kilroy was here’ was the phrase most used. These simple works, depicting a bald man with a long nose peering around a corner, were not remarkable in their artwork; but as author Charles Panati put it, “The outrageousness of the graffiti was not so much what it said, but where it turned up.” 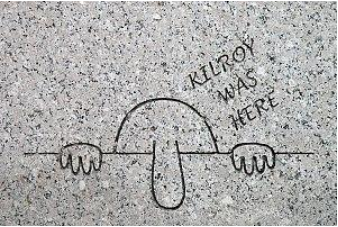 The urge to leave your mark has been around for far longer, however. Archeologists have even found graffiti remnants scratched into the walls of sites such as Pompeii! But in modern times, it was the graffiti boom in New York which started in the 1960s that has been widely credited as carrying the form into the modern context of urban art.

There’s no doubt that many street artists are exceptionally talented, and rather than try and fight the artists, many cities are trying to work with them to help beautify urban areas. Artists will often team up to create gigantic pieces that can span several floors of a building.

For some artists, their work wins them recognition and opens up job opportunities in the field of graphic design. Shepard Fairey’s street posters of Barack Obama were even recommissioned for use in his official presidential campaign and appeared on the cover of Time magazine! One thing’s for sure, as our interest in freedom of expression continues to evolve, street art will remain an important platform for social commentary.

Creative Stair Street Art From All Around The World