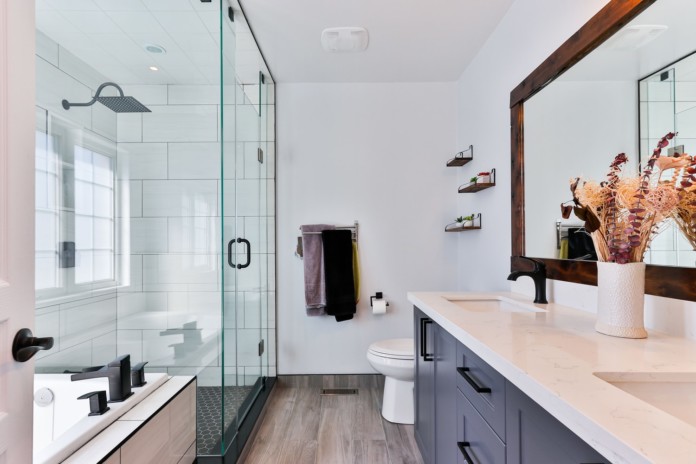 Here, we’ll take a look at some of the steps you might take to revitalise your bathroom.

Go for an unusual colour

Bathrooms don’t just have to be painted blue and white. Pick out a shade that makes a statement – whether it’s dark grey, or even pure black. Darker colours are supposed to make a poor match for smaller rooms, given that they don’t reflect light quite as much – but they can still be made to work. Don’t feel confined by conventional wisdom. On the other hand, there are certain colours which tend to make a poor match for bathrooms – bold reds, for instance, aren’t going to work in most cases.

Look for specially-formulated paints which protect your walls against moisture, and which resist mould.

Prints are a great way of making a statement on your walls. They can either contrast sharply with the surrounding colours, or they can match them more closely. Maximalist wallpaper designs are a brave move in a bathroom – but that doesn’t mean that they can’t pay off!

Mirrors play a role increasing the sense of space in any given room, and in a bathroom they serve the more practical purpose of helping you check yourself out. Place multiple mirrors around the room to benefit even more. You might go for a shaving mirror on an extendable arm, as well as a floor-length mirror for full-body inspection.

Tile patterns don’t have to be straightforward and boring. Rectangles and squares might fit nicely into one another, but then, so do hexagons. You might go for irregular shapes, or for standard shapes in irregular patterns. Talk to your tiler about herringbone and other exotic patterns – it might be that they relish the challenge!

Certain kinds of low-maintenance plant tend to thrive in a bathroom. Miniature potted cacti tend to fare particularly well. The bathroom should be a space where you can unwind – and the presence of greenery can help you get into the right frame of mind. On top of this, they can add some much-needed colour.

7 Bathroom Improvement Ideas to Increase The Value of Your Home

Tips On Giving Your Bathroom An Overhaul